There’s nothing like packing up the family and kids, hooking up the RV, and setting out across the roadways.  Staring out at some of the most glorious scenery on planet earth as drive.  And then finally arriving only to discover your RV’s house battery is stone-cold dead, leaving the question, “Does an RV battery charge while driving?”

A travel trailer connected to the towing vehicle with a seven-pin socket will trickle charge with the vehicle’s alternator.  But that may not be enough to fully charge the RV battery.  You can install a second alternator or a DC-to-DC charger for improved charging.

As you angrily unpack your RV and start setting up camp, you think back to that salesman that told you that the battery charges as you drive.  “Liar!” you call him in our mind.  Honestly, though, he wasn’t lying.  Perhaps stretching the truth, or a little ignorant but not flat out lying.

Does The Alternator Charge The RV Battery?

The big assumption is that your alternator actively charges your RV as you drive, just like it charges your vehicle.  And it’s here where there are some technicalities we need to clarify.

It’s important to understand where your house battery’s charge comes from if you want to optimize your setup to always charge reliably.

Your Alternator Charges The Starter Battery

The second battery involved in the house battery of the RV, which powers all the various appliances and electronics inside your luxurious home away from home.

As soon as you attach a trailer to the vehicle, the starter battery also powers the brake lights, indicators, etc., on the trailer.  This is the same case for an RV.

As the starter battery depletes, the alternator senses this depletion and charges it through power delivered by the engine.  If your engine isn’t running, your alternator isn’t powered, and your starter battery will eventually run flat.

The point is that the alternator is connected to and only charges the starter battery, not the house battery, as you might assume.

Your Starter Battery Charges Your RV Battery (Sort Of)

So, if the alternator isn’t actively charging your house battery, where is that little bit of a trickle charge coming from?  Well, it’s coming from the starter battery.

But this setup means your house battery isn’t technically actively charged by your starter battery.  Instead, it’s just getting a trickle charge of about five amps as a happy by-product of the starter battery doing its job.

Unfortunately, that dripping tap of a charge isn’t enough to fully charge the battery.  In fact, most of the charge that comes from the starter battery will come from the initial current of starting the engine.

Your Smart Alternator Is Part Of The Problem

The great irony here is that your alternator, especially a modern “smart” alternator, prevents a full charge to your RV battery.  And you thought it was the solution, didn’t you?

To optimize fuel economy and generally limit wastefulness, smart alternators or variable voltage alternators don’t output a constant charge.  Instead, they give only enough power to keep the starter battery charged, leaving no extra power for the RV battery to leach off.

The starter battery outputs a high voltage surge when you start your vehicle.  At this point, the RV battery grabs some of that power and stores it.  After the engine runs, the smart alternator reduces the power output to only run the necessary electronics.

Your starter battery and alternator cannot sense that your RV battery needs more power, so it just gives it the standard serving it provides to all the other components.

This is why your RV battery is likely getting some charge, but not enough.  So see, the salesman wasn’t lying after all.

How To Fully Charge Your RV Battery On The Go

Before falling down a hole of dark despair because all the lights are off, don’t worry.  Sure, you can lug a generator with you and set it up as you reach camp, but that defeats the purpose.

Luckily, there are a few simple solutions for your setup to get your battery charged while driving.

Install A DC To DC Charger

Probably the simplest solution is installing a DC-to-DC charger.  This unit sits between your starter and RV batteries, drawing the needed power from the starter battery to effectively charge the RV battery.

Your vehicle’s alternator works a little harder to charge your starter battery, but that’s OK; it’s just doing its job.

Another option is installing an additional, or auxiliary, high output alternator and running an extra connection connecting it to the RV battery.

This alternator shouldn’t be ‘smart’ and must supply a constant charge to ensure that the RV battery gets enough power.

Run The Generator On The Drive

Another reasonably simplistic solution is to simply run your generator on the drive.  Sure, you need to ensure that your generator is mounted in an area where it can be run with enough ventilation, etc.

You’ll also need to stop every so often to check that it’s still running or switch off when the battery is full.

Your RV’s RV battery receives a small amount of charge from the vehicle while you are driving.  However, because this charge comes from the starter battery and not the alternator, it is usually insufficient to fully charge up the RV battery, even on longer drives.

If you want your RV batteries to fully charge during a drive, you will need to install either a DC-to-DC charger or an auxiliary alternator.  These focus on providing the RV battery with enough power to fully charge.

Wondering about other RV-related topics? Check out these other great posts.

What Credit Score Do I Need for an RV Loan?

How Often Should You Seal Your RV Roof? 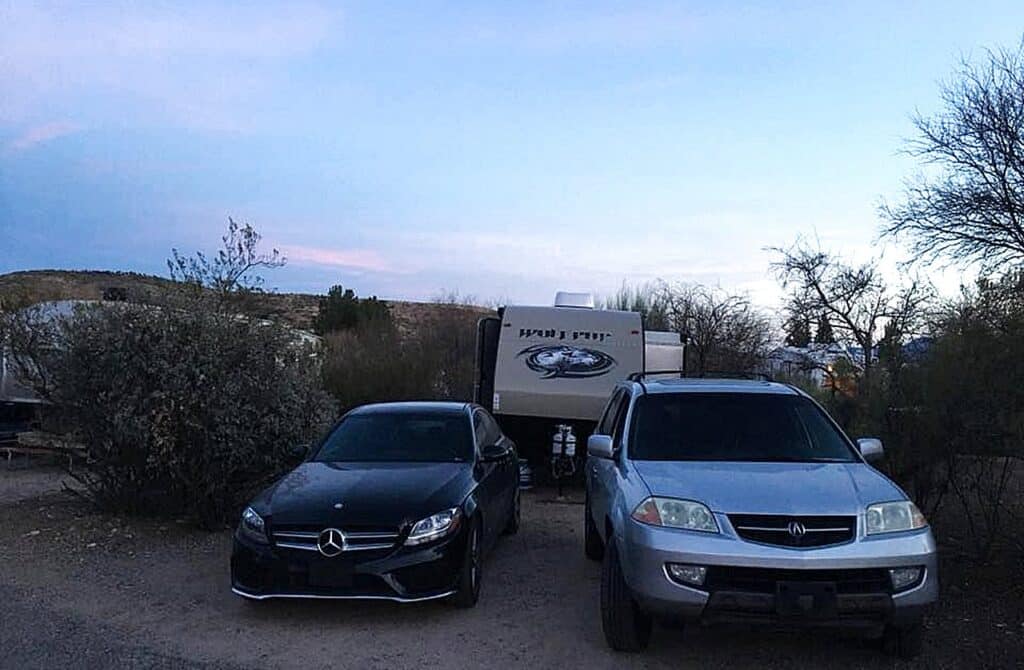 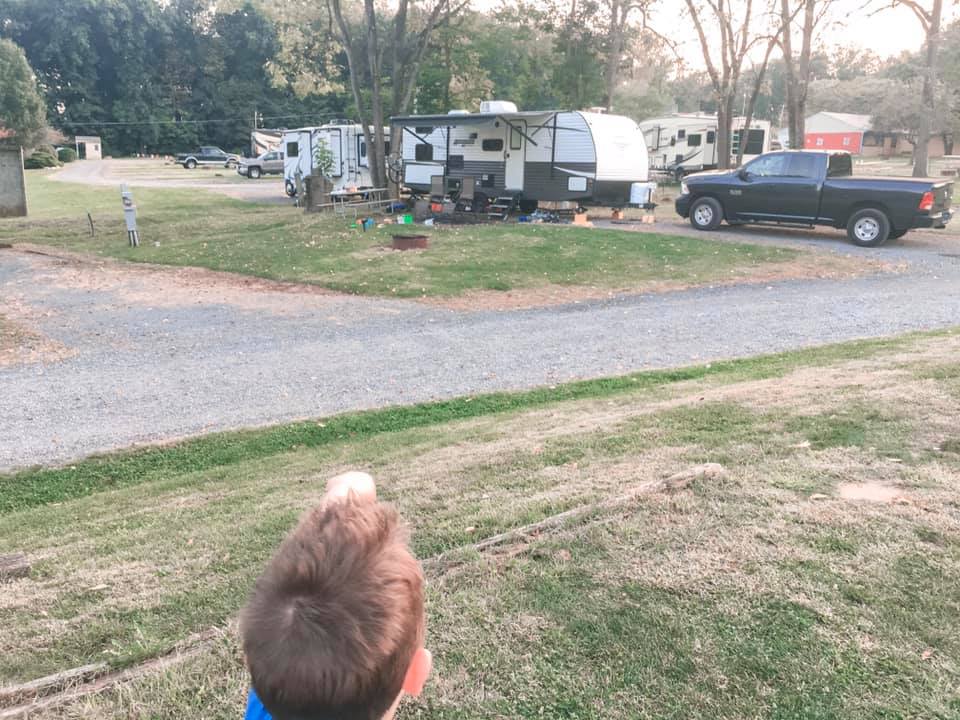 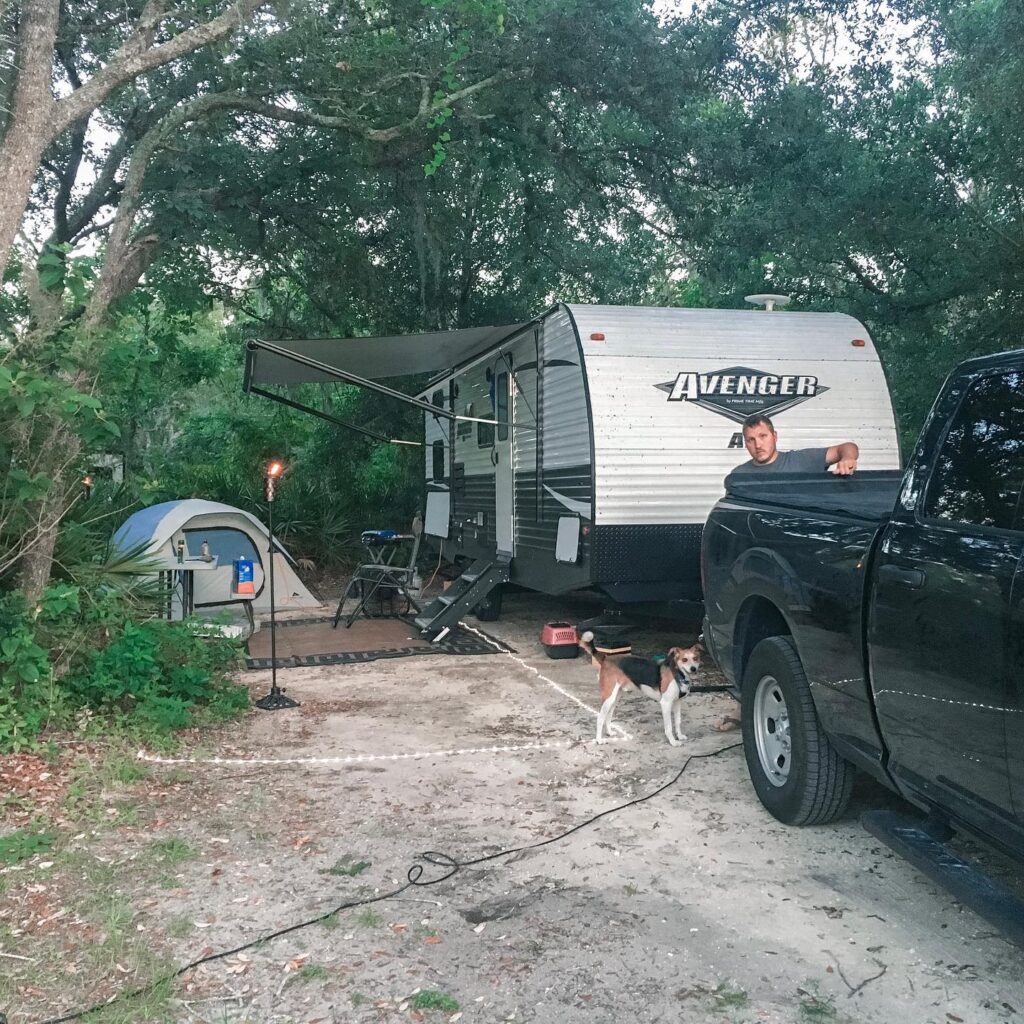 On the site, you’ll also find there are some amazing experts that will help you with all the most important things you need to know, so stick around.

Make sure to check out our about us page to see who else hangs out here to help you.